CIP’s mission is to extend the life of industrial systems and solutions by up to 10 years. To do this, a lot of testing, testing and more testing has to happen! Codethink helps lead CIP’s Technical Steering Committee and plays an integral role in the technical community. As such, Codethink shares updates and progress reports on an ongoing basis. In this new blog post, Agustin Benito Bethencourt shares what Codethink has been focusing on this year and the results of these efforts.

CIP 4.4 kernel maintenance
Ben Hutchings, CIP’s Debian kernel maintainer, has been the 4.4-cip kernel
maintainer for almost two years now. His role is to design, establish and consolidate the CIP kernel maintenance process, integrating it with the upstream stable kernel process as much as possible, reducing exceptions to the minimum, since they will be maintained by CIP on its own for the coming years. Until now, almost all of those exceptions are directly related to platform
specific features. 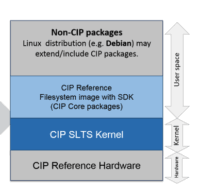 This year, as maintainer, Ben is focused on security as well as supporting the CIP community, providing advice and answering questions about the Linux Kernel and the Debian LTS process.

If you are interested in using the CIP 4.4 kernel, please visit: https://gitlab.com/cip-project/cip-kernel/

After industrial leader Moxa joined CIP in 2017, Codethink put efforts in promoting other kernel developers from CIP Members to participate in the kernel 4.4 stable review process. This is being one of the most rewarding activities for Codethink. Bringing new blood to a critical process for so many companies could become one of the most relevant contributions CIP can
make to the Kernel community.

Testing
After the strategy change decided by CIP at the end of 2017, Codethink has put Board at Desk(B@D)[3], the tool based on kernelci.org used to test the kernel, in maintenance mode, at least until the new CIP testing infrastructure is up and running. kernelci and LAVA versions have been updated, some minor improvements to ease the configuration has been merged, the Renesas board IWG20M is now supported in B@D and the documentation has been improved. Led by Robert Marshall from Codethink Ltd, two activities will focus the test automation efforts the coming weeks/months:

* Move B@D into containers, which will allow us to share efforts with AGL and
integrate B@D with the new CIP testing infrastructure.

* Modify the current integration process so B@D becomes more resilient to
upstream changes with heavy impact to the tool.

These actions will reduce the maintenance effort so they will allow us to
focus on creating tests. 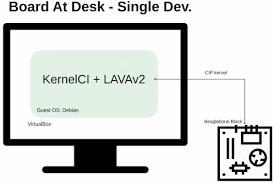 Other activities
Codethink contributes to CIP in several other areas as well. Agustín Benito will talk about the CIP kernel process at Open Source Summit Japan 2018 and introduce CIP to Open Source developers at the OpenSouthCode  in June. Codethink has also contributed to the CIP blog with an article earlier this year and is an active participant at the CIP Technical Steering Committee.